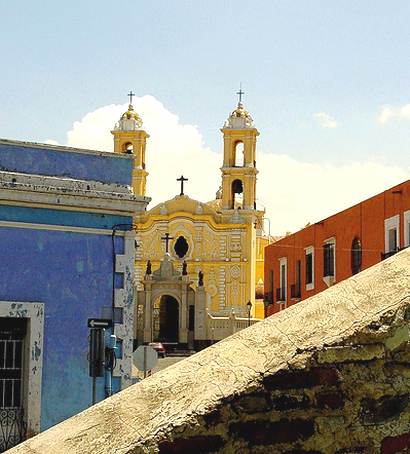 This year we spent the week around Reyes (Epiphany) in Central Mexico. Of all the marvellous sights, tastes, and smells, those of Puebla are lodged deepest in my limbic system. The city is terribly pretty, full of Spanish colonial buildings, but somehow more ornate and painted even brighter than others in similar colonial cities you can find across Latin America.

I’m not sure why Puebla felt so captivating. Perhaps it was that after a very hectic and stressful end of the year, we were at complete leisure: free to spend hours taking in the mild winter sunshine sitting on the Zócalo, lazily leafing through books in the dappled shadow, watching lovers meet, argue, cuddle, and part. The central square is a maze of trees, hedges and benches, filled with the friendly murmur of conversation. Children chased a baby pigeon who finally took refuge in a bronze miniature model of the city, and a bum alternated between a nap and contented slugs from his bottle. We were completely mesmerized by a city-employed shoeshiner who restored a pair of badly scuffed shoes to their former glory. Ancient indigenous women carried ziplocs full of freshly hewn willow whistles: their twitter formed the soundtrack of the city, along with the drizzle of fountains and the blare of car horns.

We slept in a pleasantly situated former monastery where the staff celebrated Reyes by smashing piñatas. Our room was huge but so cold during the high-altitude midwinter that we had to wear extra layers of clothes to bed – it never gets this cold indoors in Finland ;) Even this feels somewhat satisfying in retrospect: one of the many surprising contrasts Mexico had in store for us. 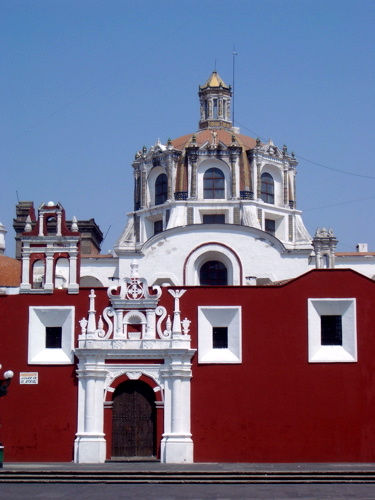 The biggest surprise of the trip was Mexican food. Somehow, the stuff that goes by that name in US restaurants is frequently bland, Anglicized, and of inferior quality: limp nachos, rock-hard taco shells, and dubious dishes smothered with sour cream and shredded lettuce. (I ate much more of this than I really care to remember while travelling in Texas.) What I encontered during my brief stay in Mexico bore little resemblance to my preconceived idea of Mexican food. I encountered an ancient, complex, and original cuisine, completely on a par with France or Italy, but much harder to fathom. Do I understand beurre mani?, souffl?s, and risotti? Yes, to some degree. But can I confidently balance three different types of chiles in a dish? Or can I soak, grind, knead, and shape corn into a perfect tortilla? 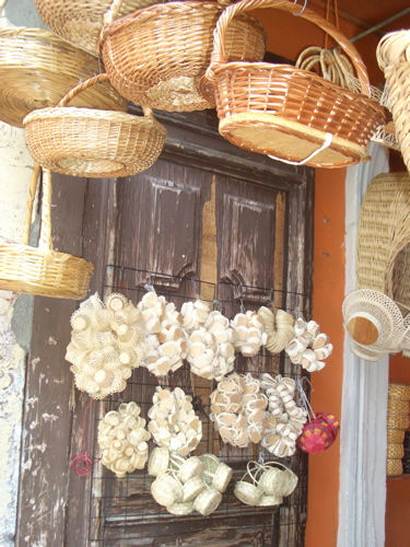 Right now I’m taking my first baby steps into understanding Mexican kitchen a bit better, to recreate some of my favorite antojitos, but also to re-experience the smoky, deep stews and hearty, flavor-packed soups that so surprised me. A decent basic cookbook should be in the mail: while waiting for it to be delivered, I’m toying with chipotles (in this I’ve unexpectedly been inspired by a Swedish fellow food blogger).

Paraphrasing an article on chowbaby.com that gives every novice the basics about chipotles:

Dried or canned, chipotles — ripened, smoke-dried jalapeno peppers — have the magical capacity to turn an ordinary cook into a talented chef. Chipotles pack a sharp burn, but their subtle, complex flavor becomes apparent once you’ve adapted to the heat.

Most supermarkets and corner groceries now stock canned chipotles — usually in a rich, dark, spicy garlic-tomato sauce called adobo. Canned chipotles are dark reddish-brown and high in sodium. The peppers slice very nicely with a knife, or you can dump the entire contents of a can into your blender or food processor and puree for a delicious sauce.

Specialty stores sell dried chipotles, which are lighter in color and give an aroma faintly reminiscent of cigarettes. Before using them, remove the seeds and de-vein them. Then toast them gently in a hot dry skillet to release their volatile oils. Cover them with hot water for a few minutes until the soften and plump up. Throw away the steeping liquid which can become bitter. Either way, you’ll usually want to balance chipotle’s diabolical heat with a hint of something sweet — honey, sugar, fruit juice or the like.” 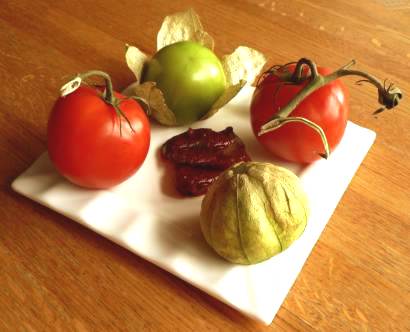 My Spanish skills are very rudimentary, based on a long-forgotten intensive period of learning during high school. New York is a highly bilingual city, however: at work, the secretarial staff is completely Spanish-speaking, so I can hone my verbal comprehension skills by listening into the local gossip. The Spanish TV channels are still almost too challenging for me. However, the game show “100 Mexicanos Dijeron” where families compete to capture the most widely used words, expressions, and colloquialisms of their local dialect, taught me a while back the world “albóndiga”, a concept that’s very near to the heart of all Finns and Swedes – a meatball. So, tonight it’s going to be

1 tomato, pan-roasted until blistered, deeply browned, and soft, then chopped

2 tomatillos or tomatoes, pan-roasted until blistered, deeply browned, and soft, then chopped very finely
2 chipotles in adobe, de-seeded, or dry chipotles, de-seeded, de-veined, toasted, and soaked in hot water
2 roasted cloves of garlic (either oven-roasted or roasted on a skilled turning frequently for about 15 mins)
0.5 tsp salt

Roast the tomatoes, turning them over and over for about 10 minutes until they are softened and blistered all over. Set the tomatoes for the salsa aside; chop the one for the meatballs. Mix with chopped onion, all the spices, olives, raisins, and capers, and saute for about eight minutes or until softened. Let cool, combine with the ground meat (do not use sirloin ground beef for meatballs, higher-fat types of ground beef and pork make much better meatballs, a 75-25 or 50-50 beef-pork ratio is ideal), crumbled pieces of white bread, salt, and egg. If the meatball dough is too soft for rolling, add a bit of crumbled white bread, mix thoroughly. Cover a cutting board with finely ground breadcrumbs (even coarsely ground cornmeal or ordinary all-purpose flour work), roll small 2.5 cm (1″) meatballs. Fry them in two batches on a very llghtly oiled non-stick pan for about 10 minutes, shaking or turning frequently.

In the meantime, either put all the ingredients for the salsa in a blender or use an immersion blender. I don’t have either one here in New York, but I found that just chopping the tomatoes or tomatillos, chipotles and garlic very finely with a sharp knife makes a pleasantly chunky salsa. Remove the seeds from the chipotles first: for me, it makes all the difference between pleasurably fiery and intolerably painful. You can always add the seeds back if you wish to pack some extra heat. Depending on what type of chipotles you use, you may end up using more or less salt than I did. 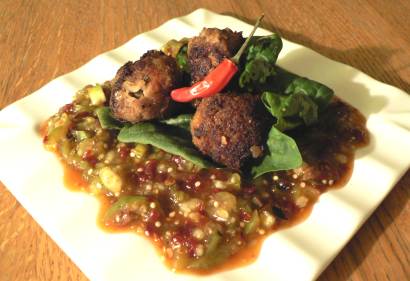 The meatballs turned out light and crispy; but the real star was the chipotle salsa, which I used as a dipping sauce. I’ve never cooked before with tomatillos, the sour, green, sticky, tomato-like fruits that have husks around them. The fieriness and tartness of the salsa was just right.

I could find tomatillos in the first supermarket I checked out here in Northern Manhattan – any area that has any Mexican presence is a pretty sure bet. However, the bored-looking Puerto Rican checkout girl at Met Foods acted like she’d never seen the fruit before either – “Wha’s that” she intoned and drew a blank on my reply.

In Puebla, this salsa is commonly prepared with ordinary tomatoes, so don’t hesitate to make the substitution if you can’t find tomatillos. The meatballs would work well as party food. If served as a main course, I’d prepare either a green salad or grill a few slices of polenta on the side (fusion-y, but serving anything corn-based is hardly wrong with Mexican food).