What is Left of Little Hungary? 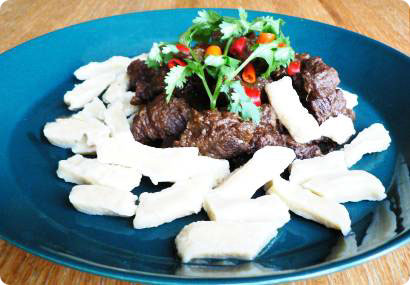 I’ve been drooling over the pictures of the Hungarian food blog Chili & Vanilia for months, so when I discovered the story about what Hungarian goulash is and what it is not there (in English, no less), I re-remembered p?rk?lt and naturally had to try the recipe over the weekend. I’m all about edible souvenirs, so I was eager to use up the Hungarian paprika I had hoarded on a visit to Budapest. Fearing that my paprika might be a bit stale, I threw in a tiny dried chili which gave the sauce subtle fire.

I also sourced the Internet for instructions for Hungarian noodles (galuska). Lacking the appropriate tool, a galuskaszaggató (very similar to a sp?tzle maker, a kitchen tool I’ve always wanted), I had to resort to making a firmer regular pasta dough that I cut by hand.

Heat oil in a saucepan. Add the finely chopped onions and cook until translucent. Now comes an important secret step: remove the saucepan from the heat and now add the paprika “? this is very important as if you would do this step still on the heat, the paprika could burn from the sudden heat and get bitter. Put it back, add beef cubes and stir so that the spicy onion mix covers the meat evenly. Cover with about 100-150 ml of water so that the liquid doesn”?t completely cover the meat. Add the sliced green pepper, salt, black pepper (and peperoncino, if using). Simmer covered on very low heat for about 1-1.5 hours. After 1 hour, check, add a litle more water if necessary, so the stew doesn”?t burn. Depending on the thickness of the sauce, cook for 10-15 minutes uncovered so that all the liquid reduces and all what you get is a spicy, thick sauce which covers the meat. It tastes even better reheated.

The resulting slow-cooked stew had a soothing transgenerational vibe, my mother and grandmother would feel very comfortable making and eating it (minus the chili) and I will definitely make it again. The secret step really circumvented burned paprika – I definitely remember the bitter taste from previous not-so-successful experiments. BTW, in the off-beat horror movie Kontroll, filmed entirely in the timelessly elegant metro system of Budapest (this film has some coolest architectural shots of any movie in recent memory), one of the main characters recites a related recipe for pig feet that quotes the same secret step. So perhaps it’s not so secret after all ;) 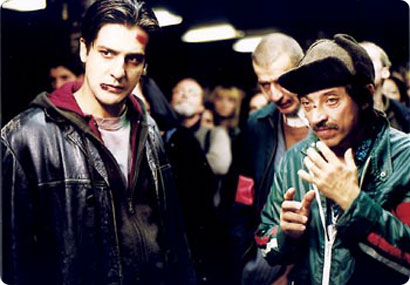 My everyday life is totally entrenched on the West Side of Manhattan, mainly in Morningside Heights, West Harlem, and Washington Heights – areas pretty firmly off the tourist map. Inspired by the sunny weather, I decided to break the mold and walk across Harlem and El Barrio to Upper East Side, in search of an appropriate dessert in the former Central European enclave of Yorkville. Unfortunately, I found that 86th Street was completely taken over by chain stores from Middle America. The likes of GAP, Banana Republic, and Barnes & Noble almost completely obscured what apparently used to be Little Germany. Some vestiges remained: I crossed over to Second Avenue and stopped by at the Schaller & Weber delicatessen (established in 1937) where German-speaking Hausfraus shopped for Pumpernickel and goose liverwurst; I did, too, and also noticed that the deli had a fairly impressive selection of Nordic products, including half a dozen varieties of pickled herring and Swedish L?kerol pastilles. In the next block, I finally spotted a Hungarian bakery. It looked brand new, definitely not a relic from the pre-War era. Inside, the cakes looked delicious and rich, but I couldn’t spot Dobostorta, my favorite. Some of the pastries were shrinkwrapped, too – never a good sign.

I gave up on Hungary and settled for the next best thing, one of the well-hidden gems in the neighborhood, a tiny German bookstore at Neue Galerie on 86th St and Fifth Avenue that has exquisite books I’d never notice anywhere else. The museum itself is very small, yet it features superb Austrian and German art from the early 20th century (Klimt, Schiele, Grosz, and Dix among others). It also the home of the lovely Caf? Sabarsky, very Viennese in atmosphere and appropriate for browsing the bookstore finds, although I doubt I’ll ever venture there again because I got a violent food poisoning from their Weisswurst last winter.

On the way back home, on a bus slowly inching forward along the northern edge of Central Park, I realized I would not have needed to leave my neighborhood after all. From the M4 bus window, I registered The Hungarian Pastry Shop on 110th and Amsterdam: the ever-popular hangout of procrastinating students, the backdrop to a scene in Woody Allen’s Husbands and Wives, and certainly the home of Dobostorta. 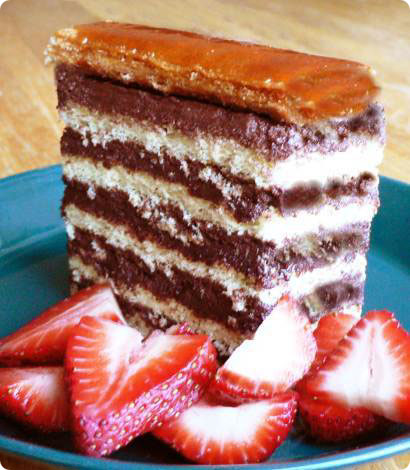 17 Responses to “What is Left of Little Hungary?”