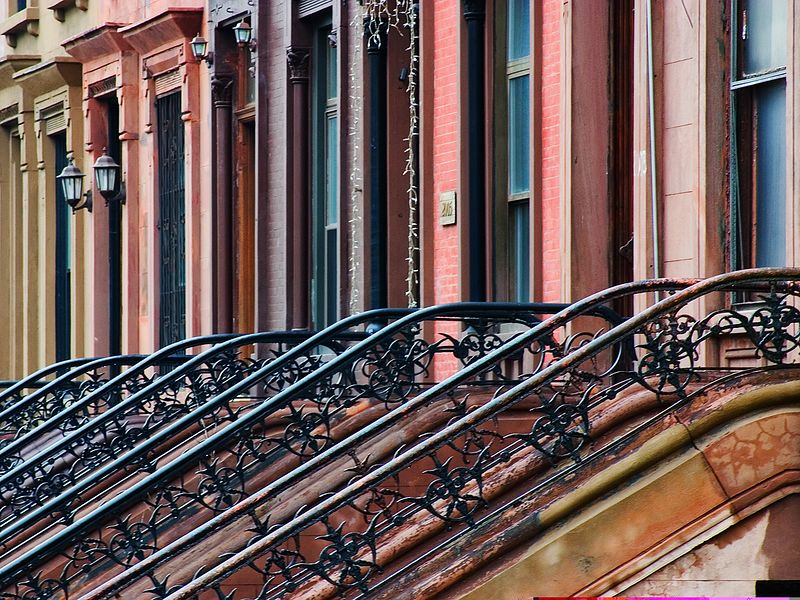 Harlem is gentrifying like crazy. Crime is down, so brownstones are going, going, gone and craggy old warehouses are being converted to condos for yuppies as we speak. All this is so inevitable that of late even the crunchy socially conscious granola-eating, Subaru-driving community activist types on my block seem to have given up organizing anti-gentrification street rallies.

For about a year, there has been a Citarella on W 125th street. In theory, Citarella sells food, but it is the Vogue of supermarkets: the selection is relatively narrow and strictly based on looks: only the beautiful need to apply. Each and every item is visually perfect, a supermodel of sorts. Citarella seems to be geared toward people who like to have food on display in their house but care little about the disgusting necessity of eating. The Harlem Citarella is surrounded by storefront churches, botanicas, fast food chains, and a sea of public housing projects, but somehow I doubt that an important local form of currency, food stamps and WIC checks, are accepted inside.

Normally, I do my weekly shopping at the boisterous, chaotic, mazelike Uptown Fairway a few blocks west. This weekend, however, I was briefly seduced by the pruned-down Sohoesque industrial chic and lack of throngs at Citarella. Of course, I could find barely any of the mundanities I had jotted down on my shopping list, so I gave free reign to impulse purchases. The Berkeley-based Scharffen Berger cocoa powder was too fetchingly packaged to stay on the shelf. (Antti, do you still ruin your kitchen decor with an O’boy container?)

Pretty incredibly, I never had any hot chocolate during my trip to Mexico in January (how stupid am I? I drank lots of lousy tea instead). Although I can’t vouch for authenticity, the addition of a bit of chili gives this infantile drink a nice, adult edge, and the combination dates back to Aztecs. If you’d rather prepare your drink conquistador style, here is a more historic and involved recipe.

1.5 dl milk
1 halved dried chili, split with seeds removed
(optional: 1 tsp or stick of cinnamon and half of a vanilla pod)
3 tbsp sweetened cocoa powder or about 30g of dark chocolate squares

Simmer the chili pod (and the vanilla and cinnamon) in milk in a saucepan. Better yet, use the microwave. Whatever you do, not let the milk boil. Whisk in the instant cocoa powder or the roughly chopped chocolate pieces. If using chocolate from a bar, continue to simmer / zap until the chocolate is melted. Take away from the heat and let steep for a bit.

Pretty incredibly, both Antti and I have a wooden tool for the very purpose of frothing hot chocolate: a molinillo, purchased from a gigantic Mexican supermarket in East LA last summer. If you own one, now it is the time to use it to give your drink a frothy crown. Apparently, Mexicans are at least as obsessed by the froth in chocolate as Italians are about the crema in espresso.

Two weeks ago when I was still in Finland, somebody at work brought in Fazer’s chili chocolate. The chili flavor was not jarring and overpowering at all, just a subtle, barely perceptible accent, so I was immediately hooked. Alas, I couldn’t find it anywhere, not even at the airport duty-free :( If anybody knows where to get it, please let me know so I can ruin my diet ;)