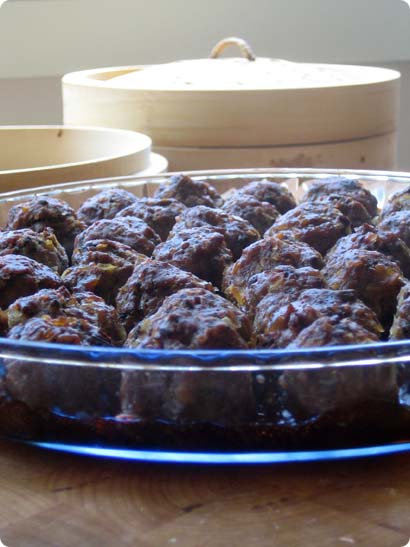 Long time, no post. I’ve been busy with work, and had a broken arm for some time, plus my apartment was under renovation, so apologies for long posting intervals :) I’m on a short business trip to Mariehamn, Åland, and having some extra time before my flight departs back home, so I figured this is as good time to blog as I’ll ever get :)

I’ve been using my trusty chinese bamboo steamer on weekly basis to cook salmon, as with steam the texture and taste gets close to perfection. My new salmon staple has become a soy sauce – wasabi marinated butterflied fillet, and I really, really love the sharpness of wasabi with warm, fatty fish. After months of raving I managed to get Anna try this dish, and albeit she liked it, apparently her steamed teriyaki salmon was even better ;) Sucker to new recipes, I tried hers, and surely it was super yummylicious!

This posting is not about steaming or fish. Enough of those already :) Since teriyaki salmon was so good, and the teriyaki sauce sooo easy to make from scratch, I decided to play around and make someting else. First I thought making chicken teriyaki, but I didn’t have chicken, but instead a pound of fat free super high grade ground beef left over from a steak tartar I made the day before.

S loves meatballs, so making them instead of some potentially fancier dish was an easy decision. Since teriyaki sauce can be done in a flash, the whole dish will be ready in 45 minutes, from fridge to the table. Basically teriyaki sauce is just mirin (japanese cooking wine), soy sauce and sugar mixed together. Simply dilute one table spoon of granulated sugar to 1/2 dl of mirin and soy sauce each and you’re done. 30 seconds in a microwave oven does the trick. I strongly suggest using low sodium soy sauce unless you have a serious death wish :D In this recipe I used 1 dl of regular soy sauce, and after all that salt I still feel the bloat :P

Mix shallots, raw potatoes, garlic and black pepper in a food processor until fine. Knead the mix together with the ground beef and 1/4 or slightly more of the teriyaki sauce. Make small meatballs, and place them onto a pan.

Cook the rest of the teriyaki sauce with corn starch until quite thick, and pour over the meatballs. Bake for 30 minutes in 200 degrees celcius until nice and brown.