A couple of days ago we visited Restaurant Piha, an Italian style place situated “behind” the shopping center Forum (Eerikinkatu 2) and next to the reliably good Spanish place Parrilla Espanola. It was a Monday evening and our reservation was thoroughly unwarranted with the restaurant less than one quarter full.

First, a couple of words about the physical appearance of the place. The overall impression is a nice & clean environment with some quite interesting wooden door-decor and a big courtyard-style center with a glass ceiling. The setting worked nicely enough without being intrusive, so that was good. Looking more closely at the setup, the first snag that one hits is the cleanliness of the utensils and the glasses – the washing and polishing certainly could’ve been done better with clear watermarks on each.

What about the service? As is unfortunately quite common in Finnish restaurants, the table is served by multiple waitresses in seemingly random order. Often this creates more confusion than warranted, but here the service was mostly smooth; there was no excessive waiting as the old dishes were taken away and the next courses brought in in a timely manner. The services was friendly and worked well, but there was not even a hint that the waitresses would top up wine or water glasses – that was obviously left to the diners themselves to do. Of the menu, I liked the fact that it wasn’t overly long while it still offered plenty of choices. Also the wine list emphasized, quite appropriately, Italian wines with only a few selections from elsewhere. Nothing too fancy made it to either list but I consider that a good thing.

Then to the food. For starters, I went with the Fruity chicken salad Tandor with Yoghurt sauce with curry and honey (€9,50). The salad looked rather big for a starter salad, but it was very good so it didn’t really matter :) The presentation was quite good, but a bit impractical as it was very vertically-oriented. The yoghurt-based sauce went well with the salad and gave it a nice, rather neutral, taste which helped cleanse the palate with the appetizer (blueberry-flavored grappa with sparkling wine). 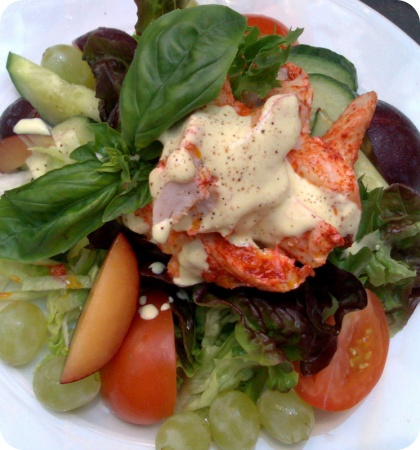 The main course selection was difficult, with Sarita’s choice of Scampi on a skewer with Parmesan white wine risotto & chili-lime oil (€20,40) sounding very enticing. I ended up trying the Saltimbocca with marsala sauce; Veal schnitzel filled with parma ham and sage, potato wedges (€23,80). From the little I got to taste of the Scampi skewer and the risotto, they were excellent. The veal snitchel was also very good – although the real thing wasn’t filled with parma ham but rather wrapped in parma ham. The dish could’ve used some more color, there might’ve been a bit too many potatoes and the few vegetables looked liked they had been overcooked a little, but the schnitzel itself was done nicely and went along well with the parma ham. The presentation of the scampi skewer was nevertheless better. 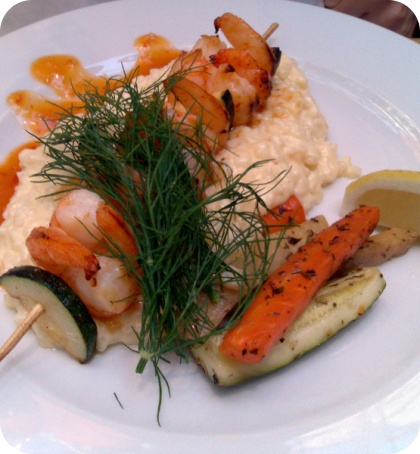 The dessert was nothing short of mouthwatering – my Creme Caramelle alla Amaretto (€6,20) was baked perfectly and the sauce was very nice. I also heard nothing but praise about Sarita’s fresh and brisk Lemon sorbet in sparkling wine (€4,80), a different kind of refreshing dessert. The presentation of both desserts was simple but flawless. 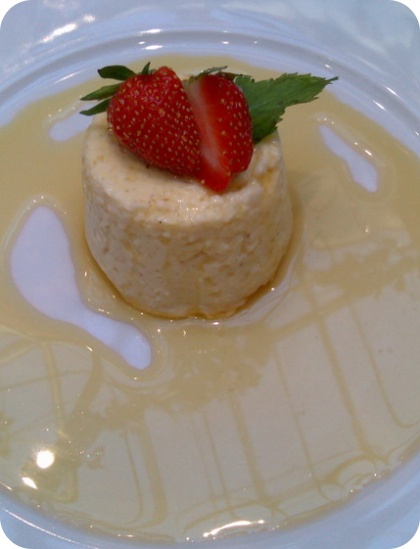 As the mentioned price points would indicate, I consider Piha to be in the middle/upper middle class of Helsinki restaurants – by no means cheap, but definately not what one would consider expensive either. As the food was mostly good and the service wasn’t bad either, it was a thoroughly pleasant experience even with some of the details being a bit off. With the decent price level, I would recommend Ravintola Piha at 4- out of 5.

No Responses to “Review: Ravintola Piha”