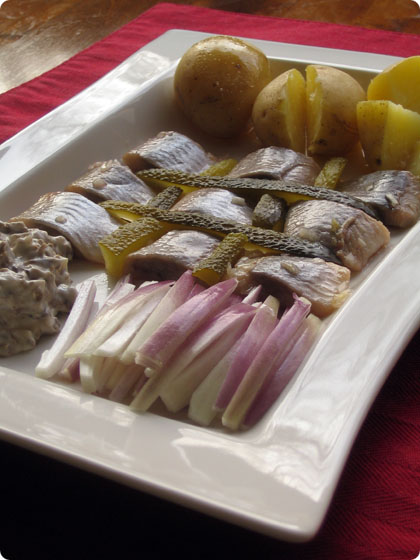 For many people asparagus season is the culinary high point of spring, but I couldn’t care less. But come the new season potatoes, and you got my undivided attention!

The spring is very late in Finland, so we have to wait still for domestic new season potatoes, which naturally are the best in the world (that means second to none, Pille) ;) Luckily countries such as Israel, Morocco and Cyprus provide us with very early potatoes. However, those are much larger and not nearly as sweet as their tiny, almost skinless Finnish cousins. To cook a domestic new season potato, it’s enough to rinse them under a running water, and the skin will fall of with a slightest rub of a hand.

Yesterday I got a big craving for new season potatoes with marinated herring, so I had to settle for Moroccoan imports. I could have bought Finnish, but at €35/kg ($20/lb) didn’t think so…

New season potatoes taste absolutely fantastic with nothing but some butter with them, but add some marinated herring and onions, and you’ve got a meal fit for kings. I especially like herrings made by a Swedish company Abba – The band ABBA actually asked their permission to use the same name. Abba Seafood was founded in 1838, ABBA the band in 1972 :) Abba has a large selection of herring in different marinades, by favorite being a French Onion marinade. IKEA sells some Abba herring products and other Swedish delicasies in all of their stores worldwide.

Boil the potatoes. Slice the onions and the pickles. Serve the potatoes with fresh butter on top and herrings straight from the jar. Garnish with some fresh dill.

In the picture above I also had some wild mushroom salad.

15 Responses to “New Season Potatoes With Marinated Herring And Onions”