Thanks to Antti for the short introduction yesterday; a while back he asked whether I was interested in doing some selective cross-posting style syndication with some food-stuff I write for my personal blog, Only Slightly Bent. There was a clear danger in saying “yes” to this, as I found out already last summer that some people actually identify me as “the guy who photographs his food”. Right. Perhaps not the kind of thing you want to be associated with in the minds of strangers..

But then again, things could be worse. I do photograph my food occasionally, so the heck with it. So I said yes.

I don’t know about superbly written stories, but I’ll write stories – probably mostly restaurant reviews. And despite the theme of the site, I can’t promise there wouldn’t be occasionally some drama. Btw, a word of reading advice is likely in order; whenever I mention “we”, the other person involved is, unless otherwise indicated, my wife Sarita.

But enough with the introductions.

One evening a couple weeks back, we decided to give another Kamppi newcomer a try: Henri’x BBQ House. I was hoping they’d fare better than their neighbor Minos (review of which is coming up later) and, being one of the few truly BBQ/steak-oriented restaurants in the city, expectations were actually quite high.

The surroundings suffer a bit from the restaurant being essentially in a mall; however, Henri’x also has a nice all-glass semi-terrace from where you could observe the life around the Kamppi center. As was expected with all the concrete and tiles, this life consisted almost purely of skaters who had the open space completely under their control. And they weren’t great either. So not much in terms of a view (yet).

Once inside, we were shown to our table after some initial confusion as to where it is that we were supposed to be seated in the first place. There is not much internal decoration to speak of and the tables and chairs are, while comfortable, also very basic. The neon bull at the bar was quite nice, but that was about the extent of the interior d?cor.

At the tables, things seemed to be in order: nice cloth napkins and a clean set of glasses. No tableclothes, but that is perfectly understandable for a BBQ place. The physical menu itself, however, was flimsy – a piece of more or less crumpled paper, some haphazardly glued to a piece of cardboard.

From reading the menu, it’s immediately clear that this is not a place for vegetarians: in fact, the main courses are all steaks. The wine was interestingly classified on the menu with selections of only “decent – good – superb”. It turned out that there is a separate wine menu, too, something that wasn’t curiously brought to us before we asked for it. Our selection of wine, Ca’del Solo Big House Red, turned out to be a bit too weak to accompany the heavy food. Of course, this was purely our mistake and I’m sure the list would’ve offered better options.

But on with the real essence of the evening, the food. The starters sounded quite delicious with choices like coconut green curry-soup, but we felt like going straight for the meat, with the hopes that the portions are big enough. Sarita went with a chateaubriand (€22) with chilli butter. I was looking forward to testing the much-advertised BBQ sauce, so I chose the porterhouse steak (€38, though see note at the end) with that. Neither of us was asked how we wanted the steaks – this could either be a good or a bad sign.. After taking a little long to arrive, I was a bit disappointed to find out that my porterhouse steak was served pre-sliced and not as whole. But as soon as it came to the table, doubts about it being big enough vanished. There was lots of it. I mean lots, the photo does not do justice to it.

And, as it turns out, it was really quite good and tender. When bringing the portion, the waitress immediately offered to bring more BBQ sauce and taking her up on the offer was the right thing to do – the BBQ sauce was delicious. Doubts about the level of doneness were luckily unfounded: everything was cooked just right. Sarita’s chateaubriand also turned out just perfect, though the chilli butter could’ve used some chilli in it – a common problem in Finland. In any case, in terms of quality of food, the expectations were met or even partly exceeded. 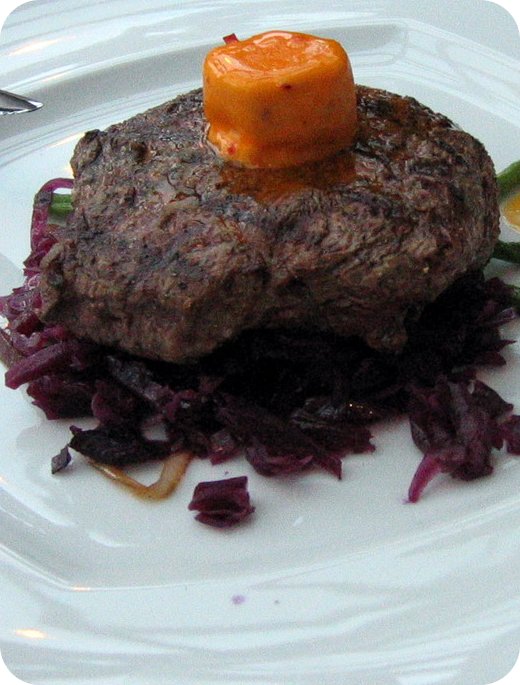 There was a choice of three side dish selections; Basic, Classic and Modern. At least the Basic with potato wedges, simmered red cabbage and an onion-haricot bake was a good selection.

Then came the shocker, however: my portion was so big that I just could not down it all. This caused more mental anxiety than actual physical trauma – am I going to have to leave delicious meat on the plate? In the end, I had to condescend to admitting defeat: there was just no room for it all. 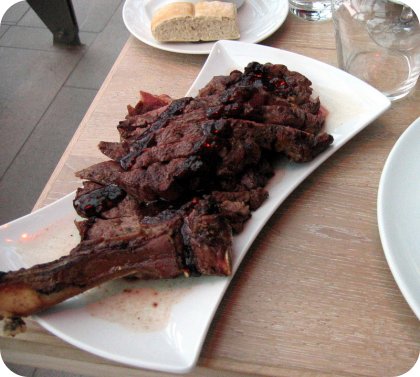 The dessert menu also sounded delicious, but anything more to eat was out of the question at this stage. When we got the check, I realized why I had trouble with the size of my portion. They had inadvertently brought me the porterhouse for two (€64, IIRC), which our waitress said is a whole kilogram of meat. What a relief. Suddenly I didn’t feel so bad about not being able to eat it all. The mistake was swiftly sorted out on the check. But of course, now I can’t be sure whether the porterhouse for one would’ve been big enough… Perhaps it’d still be safe to say that it would.

All in all, the service was quite good, and the occasional glitches (like not refilling our tiny water pitcher without asking, offering the table next to us food they didn’t order etc.) were something that I could live with. With the food also very good, it’s likely we’ll be back here – must try the starters and desserts next time, too.