Smoking a Rib Roast in a Weber Kettle

I’ve been busy at work lately, and have had difficulties to find stamina to cook after hours. This weekend is a long one however because on Monday we celebrate the 1st of May, and it is a public holiday. It’s also pretty safe to say that the outside temperature will finally stay above freezing point until the inevitable new winter after a few months, and I’ve been able to walk outside without mitten and a scarf. To me this means one thing only: BBQ Time!

I’ve always loved grilling, smoking, and barbequing – generally spekaing anything which involves playing with fire :) In Boston I was devastated as I didn’t have a place for a grill. Every time I went to a Home Depot and walked by the long lines of gas and charcoal grills my heart was bleeding. One of the very last things I did in the States before moving back to Finland was buying a couple of Weber grills. They’re horrendously expensive here in Finland, but very reasonably priced in the US. The movers had already packed all my belongings into an ocean container when I drove to the moving company’s warehouse with two huge cardboard boxes and asked them to ship them too. Interestingly I’m not apparently the only crazy European hauling grills from one continent to another. The sales assistant at The Backyard Barbeque in Framingham (where I bought my Weber Q gas grill) told that quite a few people tell them they’re taking the grills to Europe – even as a flight luggage!

But long story short – I have now two nice grills at my disposal, and since the weather was nice, my tummy grumbling and my inner vegetarian squelch by my inner carnivore, I called my brother and asked if he fancied some BBQ. Not surprisingly the answer was affirmative, so I headed to a trusty butcher shop in a nearby mall. I was supposed to buy half a kilo or so of tenderloin (fillet mignon), but then saw Argentinian Beef Angus prime rib roast (entrecôte) on sale. In the States prime rib had been my ultimate pleasure, so I basically impulse bought a 2.5 kg (5.5 lbs) slab of the prime rib roast. This decision would inevitably affect our lunch schedule, effectively turining it to a dinner instead.

While my brother was preparing the fire, I made a dry rub for the roast. I ground the dry spices in a mortar to a coarse powder, which I patted and rubbed all over the roast. The spices stick better if you moisten the meat with water first. The first picture shows the roast with the dry rub applied.

The roast may look small in this picture, but that’s only because the grill is huge – its diameter is 22.5″ (57 cm). I wanted to smoke the roast, which calls for an indirect cooking method. The coals are on the other side of the grill, and the roast on the other on top of a water-filled drip pan. When cooking with a Weber kettle, it’s important to keep the lid on at all times, as it reflects the heat back like a convection oven.

When grilling steaks, quick and hot is ok. When smoking, the temperature is kept low and the meat is cooked for a long period of time. My 2.5 kg roast took 2 hours 45 minutes in the grill, plus an additional 15 minutes in an oven, after which I kept it wrapped in a foil for another 30 minutes to post-cook and keep the jus.

A rough 120 C (250 F) is a desired lid temperature when smoking, albeit some prefer higher, some lower temperatures. I’ve found this to be an ok temp. In a Weber kettle, keep the top vents open, and control the temperature with the lower vents. And don’t let the coals burn out! Keep adding them every now and then during the cooking, but don’t keep the lid open for too long.

If you have tended the fire properly, and not overcooked the meat, you should find someting like this under the dark, spicy crust: 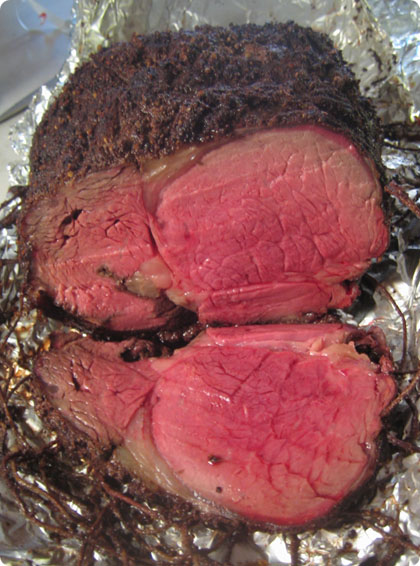 Stockyard, my favorite steak house in Boston often served horseradish sauce on the side of the prime rib, so that’s what I use at home too. Heat the sauce in a microwave for a little while before serving. Don’t throw the jus away, but bring also to the table with the horseradish sauce. Mashed or baked potatoes or sweet potatoes make a perfect side dish for the roast.

Ground everything into a coarse – semi fine powder, and rub all over the roast. Wet the meat beforehand slightly with water to help the rub to stick.

18 Responses to “Smoking a Rib Roast in a Weber Kettle”