Steaming – The New Black of Cooking 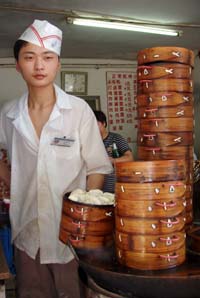 Homer: “See Marge, they could deep-fry my shirt.”
Marge: “I didn’t say they couldn’t. I said you shouldn’t.”

When it comes to my new love – steaming – Marge’s wisdom of avoiding the unknown doesn’t quite apply: Why don’t you try to steam something you haven’t before! Besides, frying pretty much destroys any and all flavor of the ingredients :)

I bought my Chinese bamboo steamer years ago when I was strolling the kitchen supply isles of my local Target in Boston. I had recently returned from Hong Kong, and the ubiquitous bamboo steamers there caught my eye. It was less than $20, so I bought it on a whim. Back at home I realized the steamer was too big to fit in any of my pots or pans. Too lazy to return it, I showed the box on top of my kitchen cupboards where it has been ever since. Until last week.

I happened to buy heaps of bok choy and green beans from a nearby Asian market, and at the same time Anna was telling about her steaming experiments in New York. I remembered my ill-fated steamer, dug it out from a closet, re-read the instruction pamphlet, and had an epiphany: Steam is hot. Heat goes up. Ha! I finally realized that I could simply place the steamer on top of a big pot instead of trying to fit it inside one. Works like a charm! (And no worries about setting the steamer on fire, sis ;) 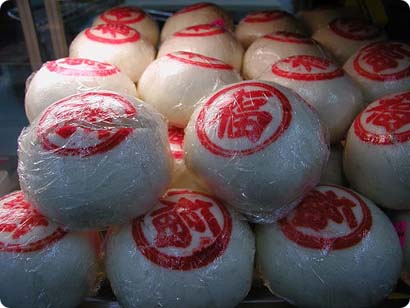 Chinese buns, dumplings, dim sum – whatever the name – are often steamed. When people think about Chinese food in Finland, it’s most likely that stir-frying comes first to mind. Before I started traveling in South East Asia, I also associated Chinese cooking with fat-dripping and really unhealthy-looking woks. Now I realize there are tons of literally fat free steamed dishes (i.e. no added fat).

The buns pictured above are filled with lotus paste, and many varieties of similar ready-to-be steamed buns can be bought in an Asian market near you. Frozen buns make a tasty side dish for any Asian meal. 10-15 minutes in a steamer and voilà: 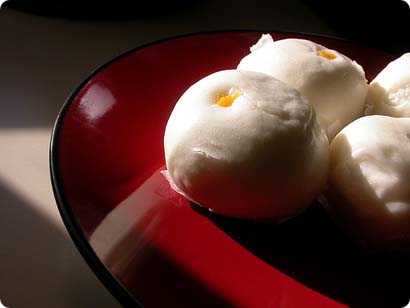 The beauty of steaming is it’s speed and versatility: While heating a few buns, you can also cook the main course in the same bamboo tower. Steaming is also a very quick way to prepare food, almost comparable to a microwave oven! A hearty fillet of fish is ready in six minutes, veggies included.

Lets have a look at this big fella I bought yesterday. (I asked for a half salmon and that’s exactly what I got…) 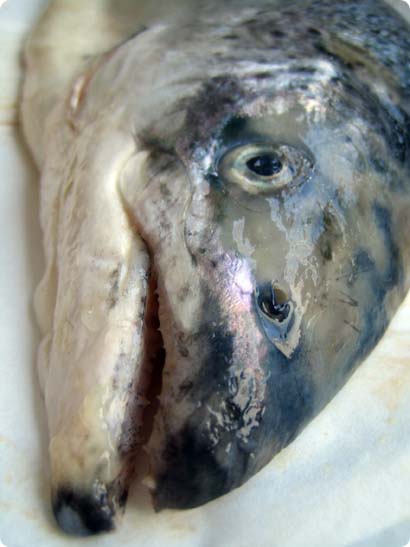 Earlier I’ve always either pan fried fish or baked it in the oven. After filleting the poor salmon I butterflied some of it, whipped up a quick thai marinade, rinsed a heap of bok choy and placed everything in the bamboo steamer. It’s a good idea to put fish and other potentially smelly stuff on a plate to protect the steamer. 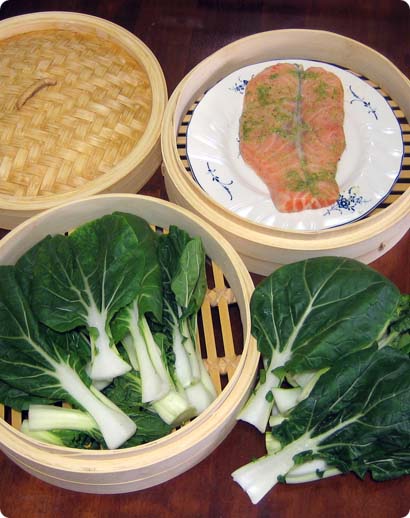 For those who haven’t seen or used bamboo steamers before, the baskets can be piled in a tower, so you only need one source of steam. Six minutes on top of a pot of boiling water, and the meal is ready. That’s what I call fast food :) 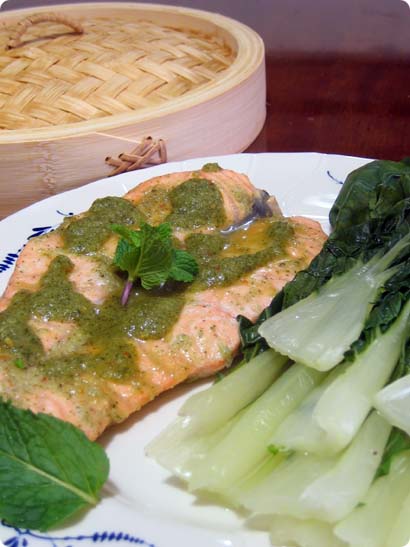 Mix cilantro, mint, ginger, garlic, salt, chilli, juice of the limes and nam pla in a food processor until a smooth paste.

Use 2/3 of the sauce to marinate the fish for 20-30 minutes. Place bok choy and salmon fillets on a plate in a steamer and steam for six minutes.

Pour the reserved sauce over the fish and serve immediately.

12 Responses to “Steaming – The New Black of Cooking”