Deep South meets Singapore in this dish I cooked for Anna in her kitchen the other day when I was still too depressed to use mine in the middle of a construction site. I’m sure soft shell crabs are a treat outside the Southern States too – Louisiana and Mississippi especially, but that’s where I had the first taste of them so for me they’re always a part of fond memories from the coast of the Gulf of Mexico. 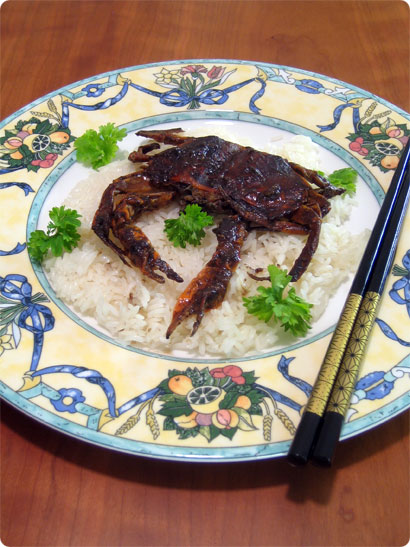 Black pepper crab (and chili crab) on the other hand are something I’ve learned to enjoy in South East Asia, particularly in Singapore and in Hong Kong. There are other variations too, but I don’t really know their names. My hosts simply referred them as “spicy crab”. One of these spicy crab dishes I had in Hong Kong, and it had huge crabs cut into pieces on a bed of small whole chillies, which were mild enough to be eaten in heaps. I think the chillies were coated with a batter of some sort – if you think you might have a clue what this dish was, please leave a comment! I’d love to try to make it myself :)

Even though I’ve always enjoyed these Asian crab dishes a lot, I’ve also found it a bit onerous to separate the crab meat from the crushed shells and claws while dining. I had had my first spicy crabs way before Anna introduced me to the world of soft shells. The soft shell crabs I ate with her in Mississippi were deep fried in batter, and didn’t have much resemblance left to normal crabs taste or texturewise. I definitely didn’t hate them tough, but rather fancied the idea of chomping down whole crabs with shells, legs, claws and all.

I wouldn’t be surprised if some of you haven’t ever had soft shell crabs or perhaps even heard of them before – I hadn’t for sure before I saw two sitting on a plate in front of me in a restaurant :) If they are a new acquaintance for you, let me give a quick introduction: Soft shell crabs are blue (USA) or mangrove (Asia) crabs that have just molten their hard shells. As these crabs grow larger, their shells cannot expand so they molt the exteriors and have a soft covering for a matter of hours when they are vulnerable and considered usable. Usually crabs must be caught and killed within four hours of molting to be useful as soft shell crab. The resulting soft shell crab is a delicacy, which can literally be eaten whole, even though they look exacly like their hard shelled fellow creatures. I can promise you the first time you put a whole claw in you mouth feels really weird :) 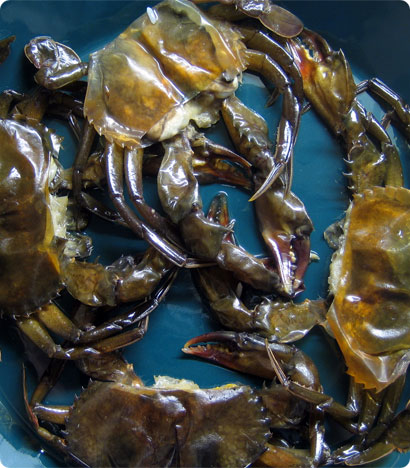 Anyhow, since soft shell crabs can be eaten whole without any leftovers, I thought they’d make perfect spicy crabs. A couple of months ago I was strolling though the isles of an Asian grocery store in Sydney, and saw a rack of Singaporean chili and black pepper crab spice mixes. I bought one pack of Seah’s Black Pepper Crab Spices and brought it back to Finland with me.

Unfortunately soft shell crabs are really difficult to come by in Finland, so I had to wait almost three months until I found a new batch of them in one of the Asian stores I frequent in Helsinki. I finally had everything I needed for my Black Pepper Soft Shell Crabs experiment, and even Anna happened to be visiting from New York, so I knew my time had come.

Clean the soft shell crabs by removing the mouth and eyes with scissors, lift the shell from both sides and remove the gills, and cut away the apron (tail).

Steam the crabs in a bamboo steamer for 5-10 minutes until cooked and the shells have turned red(dish). Discard extra juices.

Heat the oil in a wok and add the spice mix. Stir for a minute or two until fragrant, but be  careful not to burn the spices. Lower the temperature and add the crabs and mix and turn carefully for a little while until evenly coated with pepper and the crabs are warm again.

Serve immediately on a bed of rice.