The Habanero That Burnt S Twice 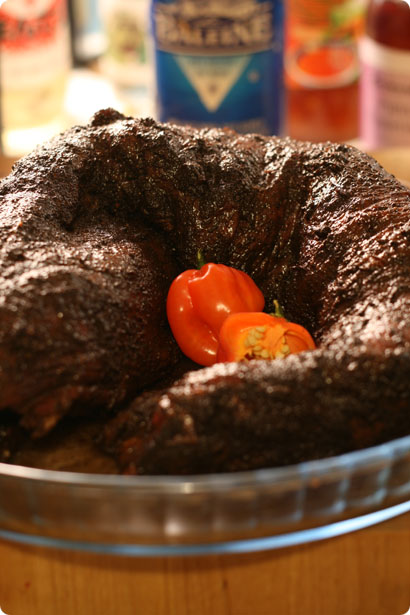 The November issue of Saveur had a tasty and interesting looking recipe titled “Coffee-Crusted Beef Tenderloin”. Because I’m dieting again and need to cook daily in order to know what I eat, a lean tenderloin recipe suited my needs perfectly. The ingredients called for coffee which I love, but also three kinds of chillies – guajillo, ancho and chipotle. In Finland it’s quite difficult to find anything else but Dutch/Israeli grown “green chillies” or “red chillies”. The packages never mention the exact type of the chilli(es) in question. For most people this is ok, as they only want to spice up their dishes a little bit, but a foodie like me could use the species name.

Anyhow, the quest for correct chillies gave me an excuse to spend my lunch hour wandering around the specialty food stores in Helsinki. After a frustrating search I had to settle for those dang “Dutch red chillies” which were the closest thing to mirasol (fresh version of guajillo). Anchos are made by drying poblanos, which are round, green chillies about the size of a golf ball. They are not very hot, but used to add mild heat. The closest thing to poblanos I was able to find was a basket full of habaneros. As many of you know, they are really, really hot. Since I was also lacking chipotles (I only have Chipotle Tabasco), I decided to go for the habaneros as well. This ended up being a good decision for the dish, but not so much for S :D

Because of the lack of proper chillies I had to modify the recipe to use the ingredients I was able to find. I used four stemmed seeded red chillies, half a habanero and a lot of chipotle tabasco for the sauce. During the whole preparation I used disposable gloves, and when the sauce was boiling on the stove the fumes actually made my lungs feel weird. This is why I found it really odd when S came home and tasted the sauce. She didn’t find it hot at all, and ended up eating it by the spoonful. By then I felt stupid for wearing the gloves while handling those “hot” habaneros, and decided to cook the other 1.5 habaneros with the tenderloin in the oven. We even took a tiny bite of the habaneros before cooking, and they didn’t taste that hot. When everything was ready, I kindly offered S one of the cooked habaneros, and she happily accepted – you know, baked bell peppers are super good too… Well, 30 seconds later she came back to the kitchen, desperately looking for milk. And then the uncontrollable drooling started. I was too afraid to take pictures, but you can get a pretty good idea by taking a look at this guy :D

Without further ado, the original recipe from Saveur (the beef itself wasn’t hot at all!):

Toast 4 the guajillo and ancho chillies over medium heat for 4-5 minutes. Soak in 2.5 dl (1 cup) of warm water until soft, about 30 minutes.

Pur?e chillies, the soaking water, garlic, chipotles in adobo and the onion until smooth. Heat the olive oil in a small sauce pan and simmer until thickened, about 30 minutes. Add sugar, vinegar, 1 tsp salt and 1/4 tsp pepper. Simmer for another 15 minutes or until thickened. Let cool.

Rub the tenderloin with olive oil, salt and pepper. Brush all over with the sauce saving the remainder for another use. Mix the coffee, cocoa powder and ground cinnamon together, and roll the tenderloin in the mixture until completely covered. Let the tenderloin sit for 30 minutes in room temperature.

Roast the tenderloin for 10 minutes, then lover the temperature to 105°C (225°F), and continue roasting until the internal temperature from the thickest part reaches 58°C (135°F).

5 Responses to “The Habanero That Burnt S Twice”